Bringing in the net

Accompanying the rhythm of the small wavelets lapping at the shore, the strange ozone scent of seaweed enters my nostrils. The weed, visible under the water’s surface, is tangled in the net we are hauling aboard. My father’s dinghy sits just metres from shore and we are bringing in the net he has set overnight. So far, this flirtation with illegality has yielded no reward. The net is empty but for long olive green strands that make untangling the filigree cumbersome and a chore. Still, it is pleasing to be sitting there. Precious time alone with my father. We are relaxed, engaged in the activity. For once as one, the light breeze and the sun on our backs conspiring to improve our moods.

The ruffled sand of the riverbed can be seen beneath the boat. A silvery glint, a flicker of action captures our attention.  A salmon, fiercely alive, gasping for breath, its scales iridescent in that special afternoon light of the deep South. It has jumped into the boat – a suicidal gesture. Distracted by this unexpected gift, we are startled when a dorsal fin breaks the surface a few seconds later. I tense my body, fearful. But then, muscles relax and breathing returns and my fear melts into intense joy. For this is no shark but the first of three dolphins. They have been swimming close to shore, no doubt chasing the poor salmon now destined for our dinner.

The first dolphin swims directly beneath the boat. Had I been quicker I could have caressed its silky head. Its two companions swim past the prow and appear to be looking for their erstwhile prey as they circle the dinghy. Perhaps realising we are not going to share the river’s bounty, the pod move off towards the small headland to the South. Despite the loss of their prey, the dolphins appear to take delight in the late summer afternoon. Soon, one leaps from the water, its grey flanks glinting in the low golden light. After a time they move off around the headland, out of view. But the image of them dancing and the joy in my heart will never disappear.

Lost in a torrent of pain
My hands
Placed around a paper cup
Palms register warmth
Mind settles, finds focus
An island of comfort in
Oceanic grief 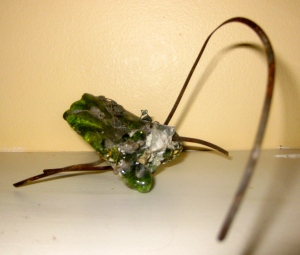 Murano glass, once a necklace
In chunky Sixties style
Olive green, gold interior
It would have looked fabulous
With what I wear today

Great tits! My father’s friend said
Defiling my precious object
Vessel of memory
Connection to past, to home